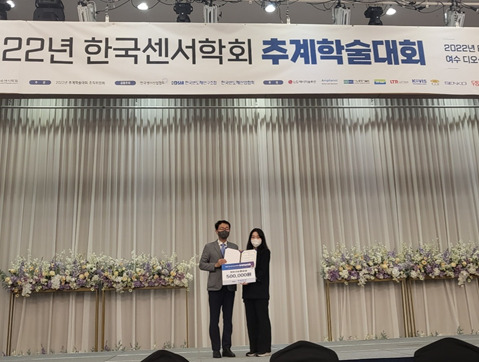 A neuromorphic module of an electronic nose (E-nose) is demonstrated by hybridizing a chemoresistive gas sensor made of a semiconductor metal oxide (SMO) and a single transistor neuron (1T-neuron) made of a metal-oxide-semiconductor field-effect transistor (MOSFET). By mimicking a biological olfactory neuron, it simultaneously detects a gas and encoded spike signals for in-sensor neuromorphic functioning. It identifies an odor source by analyzing the complicated mixed signals using a spiking neural network (SNN). The proposed E-nose does not require conversion circuits, which are essential for processing the sensory signals between the sensor array and processors in the conventional bulky E-nose. In addition, they do not have to include a central processing unit (CPU) and memory, which are required for von Neumann computing. The spike transmission of the biological olfactory system, which is known to be the main factor for reducing power consumption, is realized with the SNN for power savings compared to the conventional E-nose with a deep neural network (DNN). Therefore, the proposed neuromorphic E-nose is promising for application to Internet of Things (IoT), which demands a highly scalable and energy-efficient system. As a practical example, it is employed as an electronic sommelier by classifying different types of wines.

An artificial synapse is an essential element to construct a hardware-based artificial neural network (ANN). While various synaptic devices have been proposed along with studies on electrical characteristics and proper applications, a small number of conductance states with nonlinear and asymmetric conductance changes have been problematic and imposed limits on computational performance. Their applications are thus still limited to the classification of simple images or acoustic datasets. Herein, a polymer electrolyte-gated synaptic transistor (pEGST) is demonstrated for video-based learning and inference using transfer learning. In particular, abnormal car detection (ACD) is attempted with video-based learning and inference to avoid traffic accidents. The pEGST showed multiple states of 8,192 (=13 bits) for weight modulation with linear and symmetric conductance changes and helped reduce the error rate to 3% to judge whether a car in a video is abnormal.

A mnemonic-opto-synaptic transistor (MOST) that has triple functions is demonstrated for an in-sensor vision system. It memorizes a photoresponsivity that corresponds to a synaptic weight as a memory cell, senses light as a photodetector, and performs weight updates as a synapse for machine vision with an artificial neural network (ANN). Herein the memory function added to a previous photodetecting device combined with a photodetector and a synapse provides a technical breakthrough for realizing in-sensor processing that is able to perform image sensing and signal processing in a sensor. A charge trap layer (CTL) was intercalated to gate dielectrics of a vertical pillar-shaped transistor for the memory function. Weight memorized in the CTL makes photoresponsivity tunable for real-time multiplication of the image with a memorized photoresponsivity matrix. Therefore, these multi-faceted features can allow in-sensor processing without external memory for the in-sensor vision system. In particular, the in-sensor vision system can enhance speed and energy efficiency compared to a conventional vision system due to the simultaneous preprocessing of massive data at sensor nodes prior to ANN nodes. Recognition of a simple pattern was demonstrated with full sets of the fabricated MOSTs. Furthermore, recognition of complex hand-written digits in the MNIST database was also demonstrated with software simulations.

A self-powered artificial mechanoreceptor module is demonstrated with a triboelectric nanogenerator (TENG) as a pressure sensor with sustainable energy harvesting and a biristor as a neuron. By mimicking a biological mechanoreceptor, it simultaneously detects the pressure and encodes spike signals to act as an input neuron of a spiking neural network (SNN). A self-powered neuromorphic tactile system composed of artificial mechanoreceptor modules with an energy harvester can greatly reduce the power consumption compared to the conventional tactile system based on von Neumann computing, as the artificial mechanoreceptor module itself does not demand an external energy source and information is transmitted with spikes in a SNN. In addition, the system can detect low pressures near 3 kPa due to the high output range of the TENG. It therefore can be advantageously applied to robotics, prosthetics, and medical and healthcare devices, which demand low energy consumption and low-pressure detection levels. For practical applications of the neuromorphic tactile system, classification of handwritten digits is demonstrated with a software-based simulation. Furthermore, a fully hardware-based breath-monitoring system is implemented using artificial mechanoreceptor modules capable of detecting wind pressure of exhalation in the case of pulmonary respiration and bending pressure in the case of abdominal breathing.

Leaky characteristic in a leaky integrate-and-fire (LIF) neuron is important to prevent a permanent effect on a single input stimulus in an artificial neuromorphic system as well as a biological nerve. In a proposed single-transistor-based LIF neuron (1T-neuron), band-to-band tunneling (BTBT) dominates the leaky characteristic. Three methods to control the leaky characteristic of a 1T-neuron are demonstrated in this work: controlling the relative location of the drain junction edge to a gate, tuning the gate voltage ( VG ), and modulating body doping concentration ( Nsub ). The 1T-neuron becomes leakier with a more overlapped drain junction with the gate, decreased VG , and increased Nsub by accelerating the BTBT.

Cointegration of multistate single-transistor neurons and synapses was demonstrated for highly scalable neuromorphic hardware, using nanoscale complementary metal-oxide semiconductor (CMOS) fabrication. The neurons and synapses were integrated on the same plane with the same process because they have the same structure of a metal-oxide semiconductor field-effect transistor with different functions such as homotype. By virtue of 100% CMOS compatibility, it was also realized to cointegrate the neurons and synapses with additional CMOS circuits. Such cointegration can enhance packing density, reduce chip cost, and simplify fabrication procedures. The multistate single-transistor neuron that can control neuronal inhibition and the firing threshold voltage was achieved for an energy-efficient and reliable neural network. Spatiotemporal neuronal functionalities are demonstrated with fabricated single-transistor neurons and synapses. Image processing for letter pattern recognition and face image recognition is performed using experimental-based neuromorphic simulation.

A single transistor neuron (1T-neuron) is demonstrated by using a vertically protruded nanowire from an 8 in. silicon (Si) wafer. The 1T-neuron adopts a gate-all-around structure to completely surround the Si nanowire (Si-NW) to make a floating body and allow aggressive downscaling. The Si-NW is composed of an n+ drain at the top, n+ source at the bottom, and p-type floating body at the middle, which are self-aligned vertically. Thus, it occupies a small footprint area. The gate controls an excitatory/inhibitory function. In addition, myelination of a biological neuron that changes membrane capacitance is mimicked by an inherently asymmetric source/drain structure. Two spiking frequencies at the same input current are controlled by whether the neuron is myelinated or unmyelinated. Using the vertical 1T-neuron, pattern recognition is demonstrated with both measurements and semiempirical circuit simulations. Furthermore, handwritten numbers in the MNIST database are recognized with accuracy of 93% by software-based simulations. Applicability of the vertical 1T-neuron to various neural networks is verified, including a single-layer perceptron, multilayer perceptron, and spiking neural network.