Research team of Professor Hyunchul Shim took first place in the control intelligence field of the ‘2019 Artificial Intelligence R&D Grand Challenge’ hosted by the Ministry of Science and ICT and managed by the IITP on July 12.

The ‘Artificial Intelligence R&D Grand Challenge’, held for the first time in 2017, is expected to have a high economic and social ripple effect. It is a competition to find problems that have not been solved due to the high technical difficulties and to solve problems by artificial intelligence technologies.

In this year’s 2nd competition, the challenge was to develop basic cognitive intelligence software technology that can respond to various complex disasters using drones. Over the next four years until 2022, it has expanded into a ‘grand challenge’ that converges software and hardware to solve problems and achieve final goals.

The field of control intelligence that Professor Shim’s team participated in is the competitive games that pass a fully autonomous flight of obstacle sets consisting of a combination of mazes, windows, trees, columns, tennis nets, and strong winds, using drones manufactured under the suggested conditions.

As a difficult task to perform missions with only artificial intelligence mounted on the drones without an internet connection, most of the teams from the eight teams failed to pass the third sections. Professor Shim’s team was the only team that successes the fourth section(pipe-passing mission) and took first place.

Professor Shim’s team received the Minister of Science and Technology Prize with the 3 million won in prize money and will received a total of 600 million won in research expenses. The top three teams that won each track will continue their follow-up research after the competition and will be evaluated for their work in the second stage of the competition, scheduled for December 2020.

Participants from various backgrounds, including high school students, college students, companies, and research institutes, participated in the first stage of the competition, and 617 members of 121 teams competed, ranging from the youngest students of 18 years to the oldest 68 years. 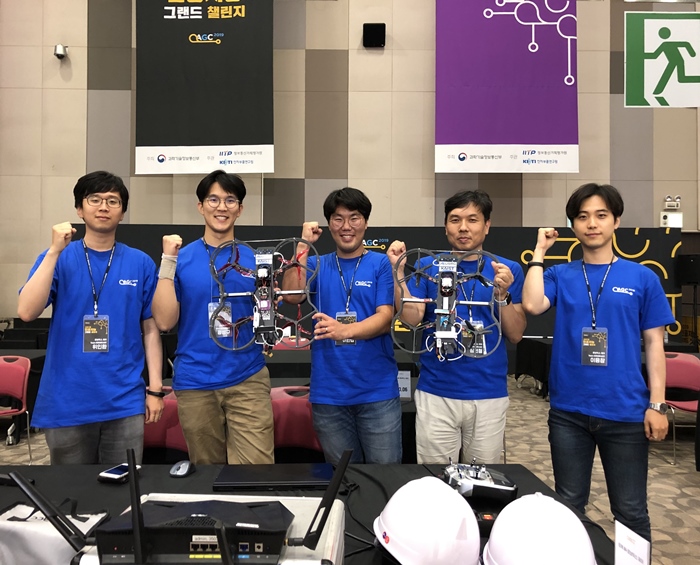