As the hype surrounding wearable devices builds, a team of South Korean researchers from the country’s top technology university claim they have developed an alternative to Google Glass: the K-Glass. 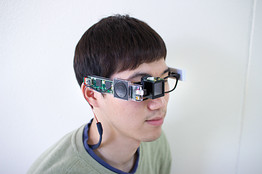 As an electronic eyewear, K-Glass shares many similarities with Google Glass. But Yoo Hoi-jun, a professor at South Korea’s  KAIST university who spearheaded the project, says it comes with a special chip that  expands the pool of objects the device can properly recognize without relying on barcodes or other markers.

The processor “duplicates the ability of the human brain to process visual data,” KAIST said. But the K-Glass, as seen in the photo, is a lot bulkier than Google Glass which is a small-sized rectangular computer attached to the frame of spectacles.

“We have yet to decide on a specific target application, which will be needed in commercializing the product,” Yoo said.

K-Glass has a long way to go until commercialization but the project comes at an opportune time.

The  South Korean government, which has been pushing for a more “creative” economy, recently named wearables as a new growth engine, saying that the segment will have a significant impact on the country’s future economic status.

This week, the Ministry of Trade, Industry & Energy initiated what it calls a “wearable smart device” forum consisting of officials from both the public and the private sectors including executives from Samsung Electronics and LG Electronics.

KAIST’s Yoo is also taking part as a committee member for the forum which is expected to take place once a month to share ideas over how to build the wearables industry in South Korea.

“Wearable devices today come with limited functions like checking a user’s health condition or linking information through smartphones, checking emails and schedules,” the ministry said in a statement. “But in the future,  the application is expected to expand to cover products used in everyday life including outfits and tools used under high-risk situations like fire-fighting and national defense.”

Yoo says he and his team are open to selling the glass device to big companies like Samsung and Google.